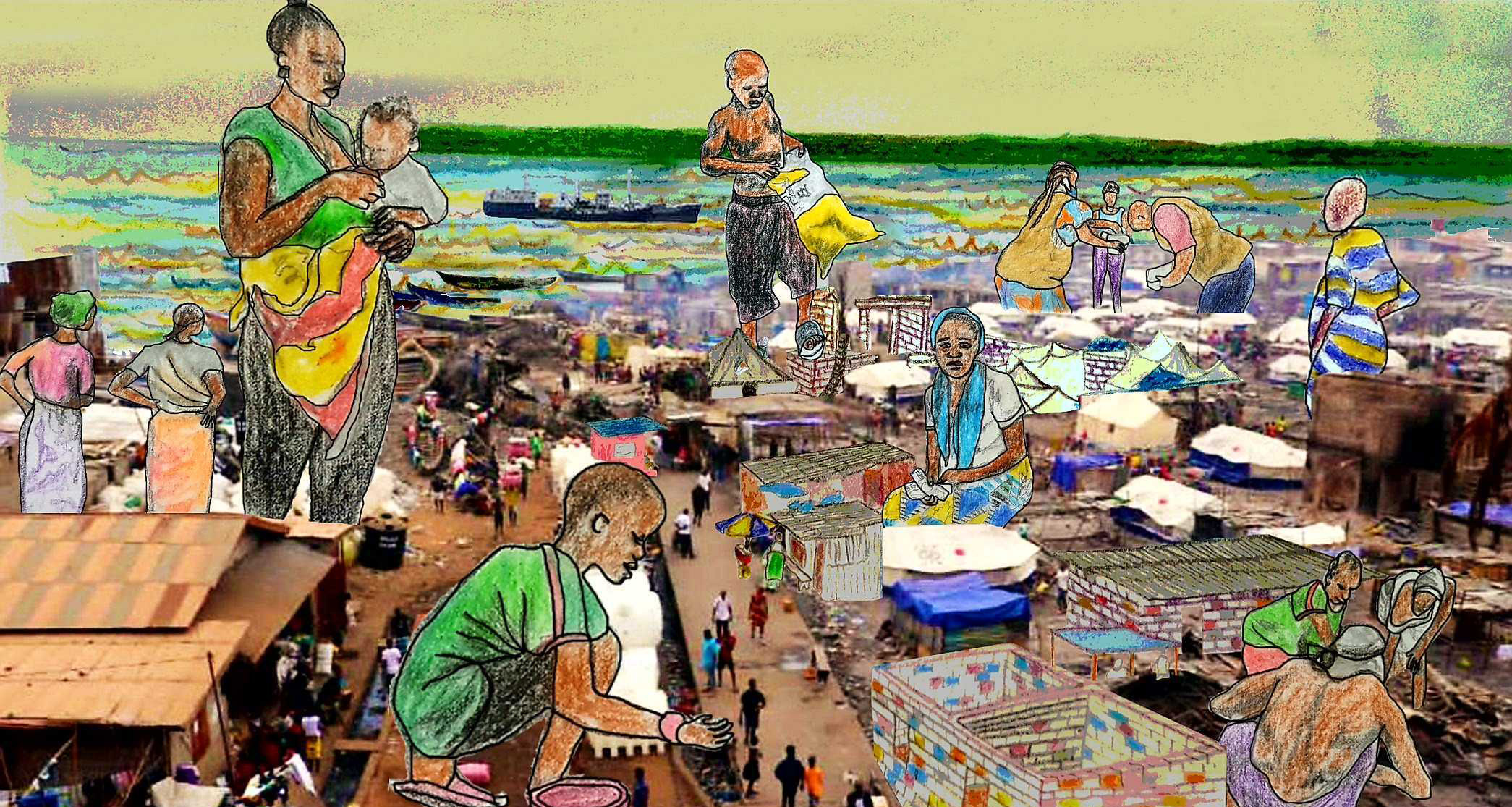 The government wants to relocate survivors and rebuild Susan’s Bay, but the people need to buy in first
By Max Seely and Mahawa Kamara
20 August 2021

Five months after Alhassan Conteh lost his home in the Susan’s Bay fire, he is desperately waiting for a roof over his head. So are the other 1,596 families which survived the disaster. Most, if not all, now live in tents and makeshift shelters that leak, droop, or simply collapse under the onslaught of a monsoon in full swing. “I want them to build better places for us,” Conteh said. “That is our current stress because the rains affect us now.”

Conteh’s wait may come to an end, though perhaps not soon enough. The Sierra Leone government is currently mulling over an ambitious plan to rebuild an improved version of Susan’s Bay, but this is fraught with difficulties, including not just resettling the displaced residents but also ensuring that they do not lose their livelihoods and incomes.

“Everything is in the hands of the government,” Conteh said. ”If they want to relocate us until they rebuild, they should make provisions for us first.”

Disaster managers in Sierra Leone are now beginning to consider what such provisions might be, and the other practicalities involved in relocating the affected community. In the beginning of July, the National Disaster Management Agency (NDMA) had announced that the work in Susan's Bay would transition from emergency response to recovery. A newly formed Technical Working Group (TWG), comprising representatives of the Freetown City Council (FCC) and various international agencies, was tasked with developing a plan to present to the office of the President. Since then, the TWG has been examining the practicalities of improving the bay’s infrastructure, including water reticulation, sanitation, waste collection, road networks, storm drainage, flood prevention, electricity, security lighting, and public telephones. But to build back better, the authorities need to first relocate nearly 1,600 households—which, as experts point out, is a complex and costly challenge.

The last time the authorities attempted something like this, it did not quite go to plan. After the 2015 floods in Freetown, the government relocated some victims to 6 Mile, a rural area in the Western Area of Sierra Leone. But the operation did not take into account people’s need for regular transport, access to supplies, and employment or business opportunities, which are concentrated in Freetown’s busy markets. Many of the residents in Susan’s Bay rely on petty trading, so relocating them too far away could easily lead them to encroach back.

Many are apprehensive about relocating. “I have gotten used to here, you see,” said Isatu Kabba, one of the fire survivors. “I would like to see and be there when they rebuild.” Nonetheless, despite misgivings, many people, including Kabba, are open to relocating if it does not mean drastically changing their way of life. “We do not choose our graves, do we? I cannot fight the government. Whatever they say to help us, we support… as long as they give me what I can use to manage life.” Conteh has a similar caveat. “If they can build a place for me and my family somewhere and help us financially for my wife to do business, I will be okay. But this is where we’ve managed. Some of us sell sand. We live here with our families. I tell you, we have gotten so used to the community.”

Resettlement also comes with financial challenges. A past example that could aid Sierra Leone planners is the 1951 Lagos Central Planning Scheme, which offers some parallels with the situation in Sierra Leone. The scheme involved rehousing 200,000 people over several years in order to clear and redevelop 70 acres of land. The owners were compensated and promised their land back at a rate of 20% of the compensation paid. So, if an owner was paid £1,000 compensation, they would be offered the freehold for the same size plot at £1,200. The scheme also included rehousing those who had to be moved. A housing estate was built and those who had to be relocated were given subsided rent before moving back to the redeveloped plot. The houses would then be available to those being relocated in the next phase of the scheme, and so on. In the end 6,000 people were moved within four years and £1.4 million (which, adjusting for inflation, would be about £45 million today) was paid in compensation.

According to Housing Market Dynamics in Africa, a comprehensive analysis published in 2018 about the housing crisis across the continent, governments, NGOs, and development partners can utilise several mechanisms to finance slum upgrading projects, including municipal development funds, social investment funds, local development funds, multilateral development banks, and even involving the private sector. Microfinance loans for housing and municipal bonds can also play a part. Figuring out these modalities is a complex exercise, but even if a workable financing plan is formulated, it may not lead to the best outcomes if it does not take into account practicalities, or win buy-in from the intended beneficiaries.
‍

While there seems to be some acceptance of the need for the displaced to be involved in the planning process, so far this been acknowledged only “theoretically, not practically”.

The Lagos scheme, for instance, was greeted with protests and continued to be beset with issues. These ranged from families no longer wanting or being able to afford re-relocating to the area they had left behind, to the eventual “re-slumming” of the area due to the uncontrolled building of shacks and shops. Another common outcome of relocation-cum-upgradation is that even subsidised new housing becomes unaffordable for the original slum dwellers and is thus taken over by middle-income households.

In Sierra Leone, therefore, it is crucial to constantly keep in mind the specific needs of the community while planning for relocation and upgradation. Jorge Crisafulli, the director of the NGO Don Bosco Fambul, has been involved in meetings with the national government and the TWG. He feels the need for a more considered plan to help the survivors—both in the short and longterm. The government, he points out, feels the people should stay with their relatives during the rebuilding—which just is not practical. Also, while there seems to be some acceptance of the need for the displaced community members to be involved in the planning process, so far this been acknowledged only “theoretically, not practically”.

Crisafully, by no means, is a lone voice in advocating the involvment of the survivors in the plans for rebuilding Susan’s Bay. A report by UN-Habitat, titled ‘A Practical Guide to Designing, Planning, and Executing Citywide Slum Upgrading Programmes’, argues that a bottom-up approach, in which the community plays a major role at each stage of the decision making process, is critical for success in the long term. Community involvement and awareness not only helps save on costs through participation, but leads to more sustainable interventions. Citing case studies on slum upgrade projects from around the world, the report recommends: “Government should be a partner but should not lead the process. Similarly, professionals are important to the process but need to support slum residents in their decisions and actions rather than trying to impose their professional opinions. Partnerships therefore are important.”

In November last year, Urban Thinkers Campus hosted a roundtable discussion with more than 50 strategic practitioners on slum upgrading in the post-COVID era. Here, too, speakers emphasised the importance of community engagement. Joseph Macarthy, Executive Director of the Sierra Leone Urban Research Centre, outlined how a lack of clear policies and a neighbourhood plan is hindering Freetown’s ability to upgrade slums in the way that residents want. According to him, the “key to success” is “engaging the urban poor as equal partners”.

This hasn’t happened in Susan’s Bay yet. Some residents, like Abubakarr Barie know that relocation and rebuilding are on the cards thanks to what they have heard from “big people” in the community, like the local chief, but are hazy about what it might entail. Others, as described earlier, have no information at all, and some seem sceptical that anything will materialise. “We were told they would rebuild but up till now, we haven’t seen anything,” said Susan’s Bay resident Ramata Kamara, who heard about the rebuild from the local councillor.

Part of the reason for the lack of clarity is, of course, that the plan is still in a nascent stage. The government is also navigating a difficult path that involves dialogues with international funding agencies, including the World Bank, on complex issuesuch as clarifying ownership rights, refining specifications, contracting construction while continuing to provide relief for victims.
‍

“The rebuild is still in the planning stages, and right now there is still much to be clarified before fruitful discussions and engagement with local communities can be achieved.”
‍

Lee Miles, who consults with both the FCC and the national government on disaster management, believes the reason for the present approach is that the authorities are still at an early stage in the process of rebuilding. “The pressure on the government in terms of Susan’s Bay is intense right now. The largely top-down approach we see now is merely part of this phase of planning,” Miles said. “The rebuild is still in the planning stages, and right now there is still much to be clarified before fruitful discussions and engagement with local communities can be achieved. At the moment, plans need firming up for the community to discuss.”

Nonetheless, even now there may still be scope to involve the community. Francis Anthony Reffell, the founder and director of the Centre of Dialogue on Human Settlement and Poverty Alleviation, has partnered with Slum Dwellers International and the Federation of Rural and Urban Poor. Their collective focus in on working with deprived areas, like Susan’s Bay, to empower citizens and help them engage with state and non-state actors on issues that affect their lives.

While the TWG recently included the federation in meetings, Reffell still feels that “there has not been any extensive community engagement” to elicit the people’s opinions into those issues. “[President Julius Maada Bio’s] own vision is to re-plan and improve on the environment," Reffell said. "But I think he may not be quite aware of the granular issues, the non-obvious realities of the communities, the socio-cultural issues.”

Going by previous research, such nuances are crucial. Each slum has different needs, and the success of upgradation policies depend on how well these factors are taken into account. For example, the success of the Favela-Bairro slum upgrading project in Brazil is attributed in large part to the state’s efforts to “include different stakeholders”, including NGOs, the private sector, and community members. A similar success story is a University of Johannesburg project in South Africa, where 16 students, their supervisors, experienced NGOs, and eight community leaders produced a plan for the upgrade of the Ruimsig informal settlement. Over seven weeks, the team mapped the area and formulated a re-blocking proposal designed to improve distribution of space, as well as sanitation, electricity, and water. Members of the community discussed and approved each stage of the process. Finally, 134 structures were successfully relocated into better areas of the community.

For such an approach to work in Susan’s Bay, it is important to organise some form of community leadership. Akim Sheriff, who coordinates emergency response for Save The Children in Sierra Leone, believes that the community needs to elect “champions” who can represent them on different issues, such as health, education, people with disabilities, and children. These spokespersons could attend meetings at every stage of the development and thus ensure that everyone in the community is given a voice and a chance to participate.

“They know the problems," Sheriff said, "and the possible solutions.”
‍