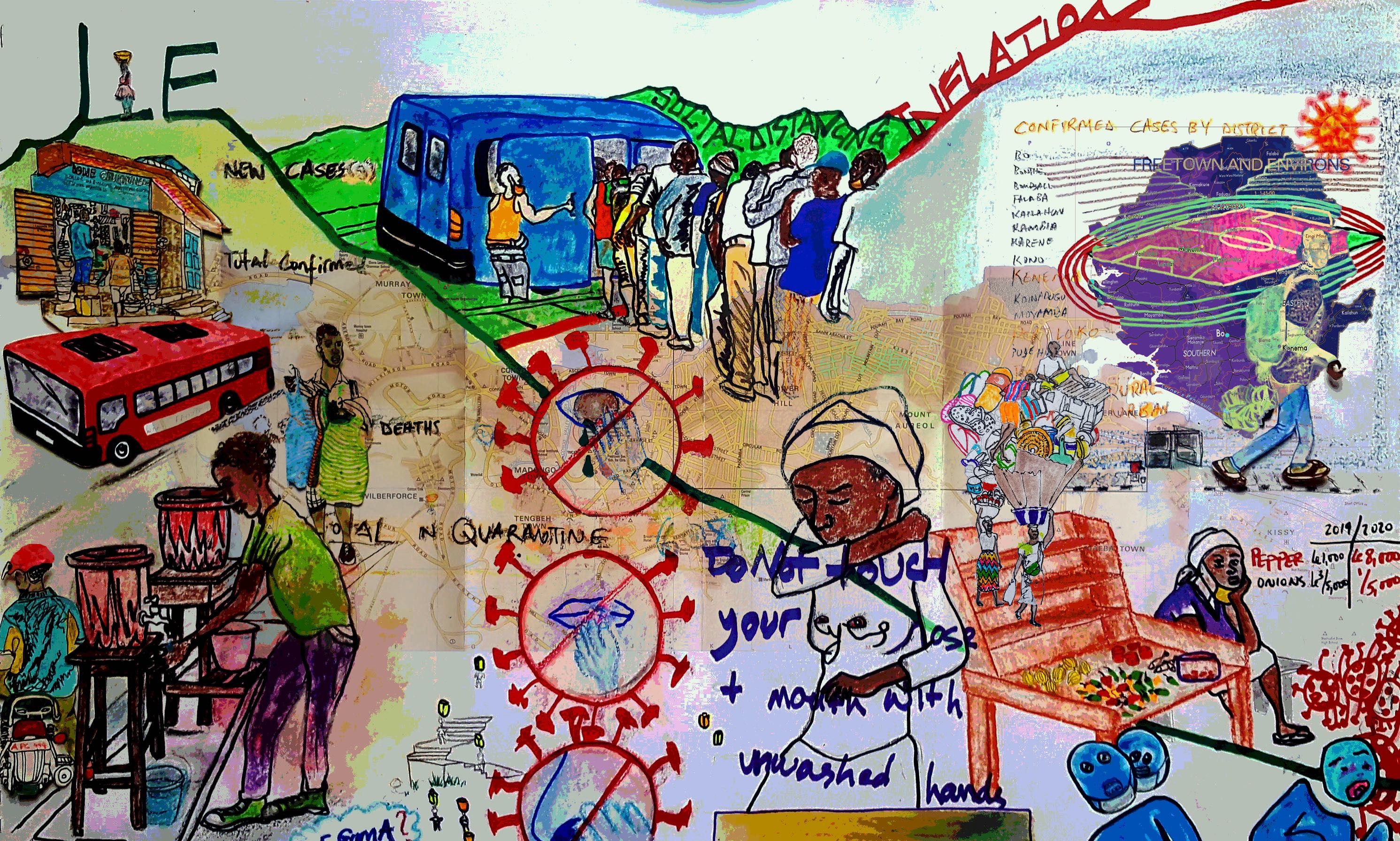 The masked burden of COVID-19

If we consider just the numbers of COVID-19 infections and deaths, Sierra Leone has fared well. So far, the country has recorded just over 6,200 cases and about 120 deaths. It has been suggested that the relatively young population, the recent experience with Ebola, and a swift response to the pandemic, including the declaration in March last year of a 12-month state of emergency, may have helped slow the spread of the virus. One concern with such figures is that COVID-19 in Africa is “underdiagnosed and underreported”, and that mortality may be “hidden” due to limited testing and death recording capacities. A corollary of this is the impact of pandemic measures on livelihoods, food security, health, and disaster preparedness—which, too, remains concealed from public scrutiny. There is, hence, a need for a more holistic look at the situation, to consider how COVID-19, like other health emergencies before, has exacerbated existing vulnerabilities in Sierra Leone.

It is is well established that disasters are rarely the result of a single event. They are instead produced by an accumulation of hazards, risks, and vulnerabilities in a population. Sierra Leone is extremely prone to natural disasters, including floods and landslides in the rainy season and droughts and wildfires in the dry season. These disasters are usually complicated by chronic issues like uncontrolled urbanisation, poverty, poor sanitation, a fragile health system, and other infrastructural weaknesses. In this already precarious scenario, the COVID-19 pandemic has exacerbated the risks for communities. Therefore, it is necessary for Sierra Leone’s COVID-response strategy to be part of a wider disaster-risk framework that takes into account existing needs and vulnerabilities, rather than drawing away attention from them.
‍

Livelihoods
‍COVID-19 has significantly disrupted people’s livelihoods and increased the risks associated with poverty. According to the World Bank, Sierra Leone’s economy contracted by 2.2 per cent in 2020, and 81 per cent of micro, small, and medium enterprises experienced a decrease in their profits due to the pandemic. This is partly a result of restrictions that the government has imposed to curb the spread of infection, including short-term lockdowns, curfews, and limits on the opening hours of restaurants and bars. With only limited state support, these restrictions have led to job losses and a reduction in the incomes of many people. The International Growth Centre estimates that 57 per cent of households in Sierra Leone have experienced a decline in income due to COVID-19.

The restrictions on movement and the temporary closure of markets have, in particular, affected rural communities and farming households. Small-scale farmers are not able to sell their products at normal levels, while day labourers and workers in the agricultural supply chain struggle to find employment. The resulting losses in income are naturally compounding food insecurity, which is already a serious issue. According to a 2020 World Food Programme report, more than 5 million Sierra Leoneans lack adequate nutrition.

Restrictions and lockdowns in other parts of the world have also impacted many Sierra Leonean families that rely on remittances sent from abroad. While exact figures are not available, Sierra Leone’s migrant workers often work in sectors most affected by the pandemic, such as construction and hospitality, and this has affected their ability to send money home.

This is just one example of how the local impacts of a disaster are shaped by global and structural drivers. COVID-19 is an international health emergency, but rather than acknowledging how different countries are interconnected in the risks and vulnerabilities they face, many governments are turning inwards and adopting more protectionist measures in their response to the virus. This is illustrated by the hoarding of vaccines by higher-income countries, as well as the cuts that some have made to their foreign aid spending.

The UK, for instance, has reduced its overseas aid budget in 2021 to 0.5 per cent of national income, down from 0.7 per cent. This translates to an estimated decrease in overall aid spending of £3.5 billion. The UK’s bilateral aid to Sierra Leone was £80 million in 2019–20, but this will be reduced significantly in 2021, according to the Center for Global Development. Inevitably, this will lead to significant cuts to programmes that provide essential services, such as water, sanitation, and access to healthcare to marginalised communities. With roughly half of public infrastructure and investment projects in Sierra Leone funded by foreign aid grants, such cuts have already led to the closure of some projects.

Together, these challenges show how COVID-19 is exacerbating economic insecurity in Sierra Leone. Given that approximately 60 per cent of people live below the national poverty line, recovery from such setbacks will not be easy. The socioeconomic impacts of COVID-19, as recent research shows, will aggravate other serious problems, including food insecurity.
‍

Health needs
‍While the recent experience of Ebola provided a framework for countries in West Africa to respond to the emerging risk of COVID-19, the pandemic has diverted attention from other health vulnerabilities.

The most significant challenge for communities is access to healthcare, especially outside of major cities. While in 2010 the government of Sierra Leone introduced free healthcare for some groups, including children under 5, costs remain prohibitive for many families. There is a lack of trained clinicians, diagnostic services, basic medical equipment, and drugs in Sierra Leone, all of which contribute to adverse health outcomes. According to a 2019 report published in the African Journal of Primary Healthcare & Family Medicine, there are just 1.4 doctors, nurses and midwives per 10,000 population in Sierra Leone, equating to a qualified workforce of under 1,000 to serve a population of 7.8 million.

There are also apprehensions from some medical professionals that the focus on COVID-19 might hinder measures to fight endemic diseases like malaria, one of the leading causes of death in Sierra Leone. It is worth noting that in 2014 twice as many people died of malaria than in the Ebola outbreak. Improving maternal and birth outcomes must also remain a high priority in Sierra Leone. According to UNICEF, maternal mortality rates, as well as those for newborns and children under five in Sierra Leone are amongst the highest in the world. In addition to these chronic problems, the pandemic has resulted in fewer people seeking medical help across Africa, which may also lead to poorer health outcomes overall.
‍

Disaster risk framework
‍While COVID-19 is a serious public health threat, it is important to acknowledge that some responses to the pandemic have heightened existing vulnerabilities in many communities. This is not unique to Sierra Leone — a recent report by Oxfam outlined the inordinate impact that COVID-19 has had on marginalised communities across the world.

Crises that consume disproportionate share of resources, like the ongoing pandemic, can set back development gains and make communities more susceptible to other types of disasters

Countries with underlying social and structural inequalities have limited capacity to respond to complex health emergencies such as COVID-19. It is also crucial to recognise that crises that consume a disproportionate share of resources and attention, like the ongoing pandemic, can aggravate existing insecurities, set back development gains, and make communities more susceptible to other types of disasters. Public health emergencies may increase poverty and inequality, divert investment from other social programmes (including education and health), and increase the risk of food insecurity.

It is therefore clear that public health emergencies are complex disaster-risk drivers, and should be integral to disaster-risk frameworks and planning for lower-income countries. This means not planning just for the direct effects of public health emergencies — which are more clearly identified in the existing frameworks for disaster risk reduction — but to also mitigate the risk of policy responses having unintended adverse impacts.

The Sendai Framework for Disaster Risk Reduction aims to “prevent new and reduce existing disaster risk through the implementation of integrated and inclusive economic, structural, legal, social, health, cultural, educational, environmental, technological, political and institutional measures that prevent and reduce hazard exposure and vulnerability to disaster, increase preparedness for response and recovery, and thus strengthen resilience”. This framework recognises that while a country’s leadership must be at the helm of such efforts, local governments, NGOs, and the private sector must also share responsibility.

How could Sierra Leone move towards adopting this approach? It is heartening to note that the nation has already begun to move in this direction in recent years. Following the 2014–16 Ebola outbreak, Sierra Leone took significant steps to enhance future epidemic preparedness, including participating in the West African Regional Disease Surveillance Systems Enhancement (REDISSE) programme, which coordinates access to resources, such as laboratory facilitates, personal protective equipment, medication, and vaccines. In 2019, Sierra Leone launched the National Action Plan for Health Security which seeks to improve healthcare access and also build resilience for future disease outbreaks and public health hazards. And crucially, in November 2020, the National Disaster Management Agency came into being, with the objective of being the nodal organisation for strategic coordination and management of “disasters and similar emergencies throughout Sierra Leone and to develop the capacity of communities to respond effectively to disasters and emergencies”.

While these initiatives are certainly in the right direction, it is possible that there is still a tendency among disaster managers in Sierra Leone to look at disaster events in isolation—through the lens of immediate relief, often at the expense of recovery and resilience—rather than as part of a complex system (see related feature: The unintended consequence). This can be counterproductive. There is, hence, a pressing need for agencies such as Sierra Leone’s National COVID Emergency Response Centre (NACOVERC) and the NDMA to consider the indirect impacts of COVID-19. Mitigating such foundational issues are critical for building resilience in a disaster community. This will require the national agencies to enhance their coordination with external stakeholders—such as the World Bank Group’s COVID-19 response and other aid agencies—to include assessments for the less-visible vulnerabilities in communities, and fashion focussed interventions to reduce their impacts.

Jamie Matthews, PhD, specialises in disaster communication. He is the co-editor of Media and Disaster Communities (Palgrave).