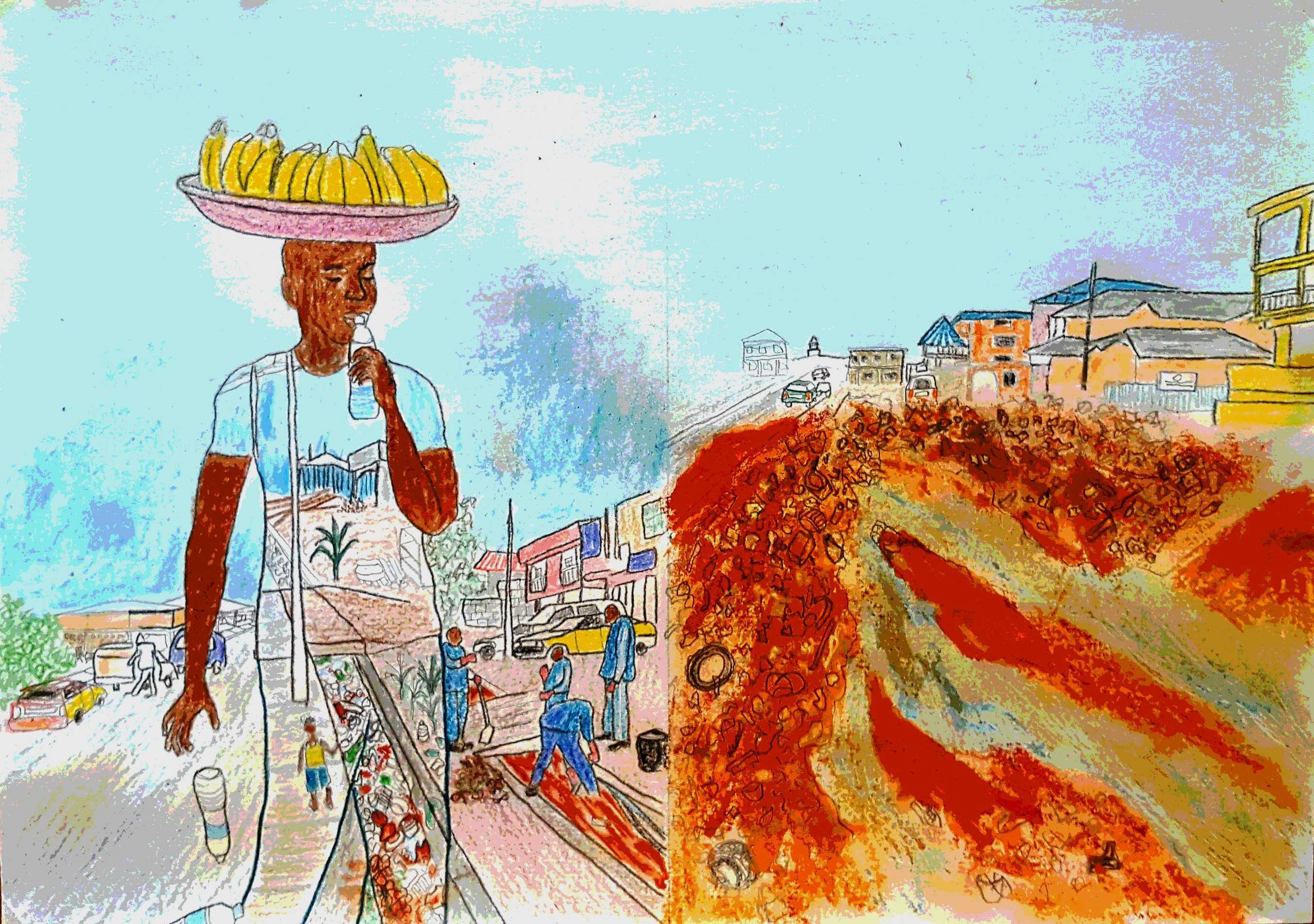 At 6am on a Thursday, Sallieu Bangura, dressed in bright orange regulation clothing, clocked in at the premises of a private waste management company contracted by the Sierra Leone government to collect solid and liquid refuse in Freetown. Bangura and four colleagues work one designated location a day over the course of an eight-hour shift, collecting garbage from some 150 households. Like they do most mornings, they loaded a truck with bins, shovels, and rakes, equipped themselves with protective gear, and drove out of the premises. Today, they are headed to Regent Village, some 10 kilometres away. Bangura earns Le 800,000 (approximately $78) a month. He took up the job some six years for the steady income it offered, because he “didn’t want to sit idle or become a criminal” .

“People look down on us as if we are not human beings,” says Bangura a little later, pulling two garbage bins behind him down Dadley Street in Regent. “They treat us like we are filthy and stinking.”

But Bangura believes in the value of his work. “There used to be piles of waste in some areas around the city, but now we are trying to control it,” he says. “We are helping people practice proper waste management and it has made a huge difference in our city.”

Though critical, the efforts of people such as Bangura are just not enough to overcome the waste disposal problem that is troubling parts of Freetown and contributing to its disaster vulnerability. A report published by Concern Worldwide, an Ireland-based charity that also operates in Freetown, says only 21 per cent of the waste in Freetown is appropriately disposed of, with the remainder, amounting to about 550 tonnes a day, either burned or discarded on the roads, gutters, and waterways. The problem is not just one of hygiene and aesthetics. The garbage choking the already inadequate drainage system is a key ingredient of the rainy season disasters that Freetown has seen in recent years. The combination of trash-clogged drains, intense rainfall, overburdened urban infrastructure, and the proliferation of slums and informal communities — many of which are built with flimsy materials and located in vulnerable areas — has resulted in floods and mudslides displacing and killing thousands of Sierra Leoneans in recent years.

Mustapha Kemokai, Environment and Sanitation Officer at the Freetown City Council (FCC), which oversees waste management in the city, acknowledges that the garbage situation is “extremely tough”, particularly in the wet season. According to him, “a lot of money” is being spent on waste collection, but “people dump their trash in the drains, creating flooding”.
‍‍‍

The garbage choking the already inadequate drainage system is a key ingredient of the rainy season disasters that Freetown has seen in recent years.
‍

While this may be true, it presents an incomplete picture of Freetown’s garbage challenge. Many people cannot afford to make use of a private waste disposal service, which requires registering for a fee of Le 125,000 ($12), and then paying the same amount each month for the weekly garbage pick-up. In a country where the monthly minimum wage is only Le 600,000 ($48), these costs can be prohibitive for many. In addition, the coverage of the service is limited and does not extend to some of the informal settlements that need it most.

While more affordable alternatives for garbage collection do exist, these too have their limitations. One such initiative is Klin (Clean) Sierra Leone, which is overseen by the FCC. This programme aims to “empower” unemployed youths by recruiting them to collect garbage door to door, using pushcarts rather than trucks, and offering a more flexible pay-as-you-go arrangement.

Abdullai Kamara, who has registered his cart with the FCC, works according to this model. “I push my cart from one community to another, shouting ‘Klin Salone’, and those who want a pick-up call for me. The money depends on the amount of garbage,” he says. Like Bangura, he believes he is helping keep his country clean and “with cleanliness comes development”. Kamara says he wouldn’t mind carrying on in this line of work for the rest of his life. However, even though he handles potentially hazardous waste, he does not have any protective gear to wear during his 7am — 7pm shifts, six days a week. When garbage tumbles free from his unsteady, overburdened cart, he pushes it back with his bare hands.

While the employees of a private company and independent sanitation workers like Kamara may work under radically different conditions, it is worth noting that in a country where there are barely any organised provisions for recycling or composting, most of the garbage they collect ends up at the same location: Kingtom landfill, a vast (and growing) expanse of festering garbage. It is still a better destination than another sprawling site nearby that serves as an informal landfill, and which also happens to be one of the largest and most impoverished shanty settlements in the city.
‍

A few decades ago, Kroo Bay was a fishing village with a relatively clean beach. Today, according to a report by the development organisation Volunteer Services Overseas, it houses around 10,000 people, some of whom live in rickety huts built “upon a layer of garbage… around three to five feet deep, beneath which lies sand”. These congested structures — assembled haphazardly from discarded metal, sticks, rubbish, and mud — lie near an estuary, making them extremely vulnerable to flooding, a problem that is exacerbated by the trash and sewage that is indiscriminately consigned to the river. Every year, for more than a decade, the settlement has faced floods in the rainy season as well as a host of incumbent health risks, such as malaria and cholera, fostered by reeking pools of stagnating water. Sierra Leone’s average life expectancy is just 54 years, and Kroo Bay’s is believed to fall well below that average.

“When it floods here during the rainy season, it’s not just water but trash and all kinds of filth,” says John Bangura, a Kroo Bay resident. This problem extends to many other neighbourhoods in Freetown, which is one of the wettest cities on the West African coast (receiving average annual rainfall of more than 3,500mm) and where a majority of the population resides in slums or unplanned settlements.

Currently, Freetown’s ability to deal with the garbage it generates falls gravely short of the requirements of the people living in slums and in difficult-to-reach parts of the city — as is clearly evidenced in the overflowing garbage cans, mounds of exposed trash on virtually every street block, and makeshift landfill sites on the outskirts of the city. This unregulated trash disposal has ecological, human health, and economic repercussions in most communities.
‍

The waste management system in Freetown has suffered due to changing hands between multiple public and private organisations.

“Solid waste management in Freetown poses vexing problems such as low service coverage, insufficient budgets, highly inadequate equipment, substantial inefficiencies such as high costs, low quality service, low labour productivity, poor public attitudes, and widespread illegal dumping,” Breda Gahan, a Senior Health and HIV/AIDS Advisor for Concern Worldwide, says. According to her, the waste management system in Freetown has suffered due to changing hands between multiple public and private organisations. “The shifting authorities — the political football — have made handling municipal solid waste in Sierra Leone one of the most expensive urban services, accounting for up to 3 per cent of the country’s GDP and 45 per cent of municipal income,” Gahan says.

Melissa Medegbe, an Environment Officer with the Environmental Protection Agency (EPA) believes that the burgeoning garbage problem is rooted in the lengthy civil conflict that wracked Sierra Leone from 1991 to 2002. The existing infrastructure was severely damaged during this period, and was later unable to cope with the growth in the city’s population to more than a million currently — a number that is expected to double by 2028.

Given how congested and prone to disaster Freetown already is, the crisis could get a lot worse unless immediate steps are taken to fund and execute waste management initiatives. According to Medegbe, the most important step for now is to bring more regularity in waste management, which in turn will help attract more funding.

“We require more funding and vehicles to manage waste in Freetown. We have a lot of trash, but not enough vehicles to transport it to the landfill… people often just throw their trash into the drains, causing it to flow on to the roadways and creating blockages,” Medegbe says, adding that the road network also needs to be repaired in order to allow free flow of traffic and lessen congestion. “There is a need for additional designated waste transition sites. We have very few now, just about two — and this creates opportunities for illegal dumpsites.”
‍

‍
A significant issue in Freetown’s waste management is a lack of awareness among the public, which compounds the problem of inefficient infrastructure. Recognising this, the EPA and FCC have intensified their mass sensitisation efforts, especially in the ongoing rainy season, in the hope that it will create an attitudinal shift in the people and motivate them to dispose of waste properly.‍

Medegbe believes that Sierra Leone should work with international organisations to holistically address the issue of waste management. Some advances have already been made in this direction. For instance, in 2019, the International Organization for Migration (IOM) gave trash collection equipment — including bikes, shovels, and safety gear — to the FCC for the setting up of 20 sustainable micro-enterprises that would conduct door-to-door rubbish collection in Freetown. Additional initiatives of this nature could help promote better outcomes for waste management.
‍

According to a UN assessment, 80 per cent of Freetown’s trash could be recycled or composted, but this potential is still untapped.

‍
Re-evaluating waste as a resource could also lead to several gains. According to a UN assessment, 80 per cent of Freetown’s trash could be recycled or composted, but this potential is still untapped. “Currently, there are few organisations into this venture, like Shae recycling, the first indigenous waste recycle company. The advantages of recycling will compel individuals to consider it,” Medegbe says. The energy-generation uses of waste should also be explored, adds Gahan, pointing to a 2014 study that estimated the city’s energy potential at 398.2kWh per tonne of waste — enough to meet the electricity needs of 50 households in one day.

According to Medegbe, the Sierra Leone government should create a supportive framework to encourage public-private partnerships (PPP) geared towards transforming waste into wealth via recycling, electricity- and gas-generation, and creating employment opportunities. “The international community could also ameliorate the situation by collaborating with Sierra Leone,” Medegbe says. Until then, however, the rainy season will continue to be a harbinger of dread in Freetown.
‍

How the focus on Susan’s Bay has heightened Freetown’s vulnerability to other disasters
By Max Seeley, Suphian Bangura, and Joshua Yarjah
© 2021 by Tie u Orja
Home
Reportage
About us
Team
Contact